I didn’t realise it had been so long since I posted an update. I’m now 19 whole weeks pregnant 😍😍😍 current bump is looking like

So following from last update we had our scan at 10 weeks where everything was looking great still and then our 12 week NHS one, where we also had the screening for Edwards, Patau and Downs syndromes. Thankfully we are low risk for all of them. Then we couldn’t wait any longer and had a private gender scan at 16 weeks where we found out it’s a…..GIRL!!!! We actually were all sure it was going to be a boy so was a bit of a shock but we are all so excited. H came with us to the gender scan and it was just the nicest thing. She absolutely loved it and it was so nice to have her included in it and in sharing with the rest of the family. She’s thrilled she gets a sister and not a brother too 😂 we also got a little sneak peek in 4d of her little face. I’m never sure if I like other people’s 4d shots but I love ours 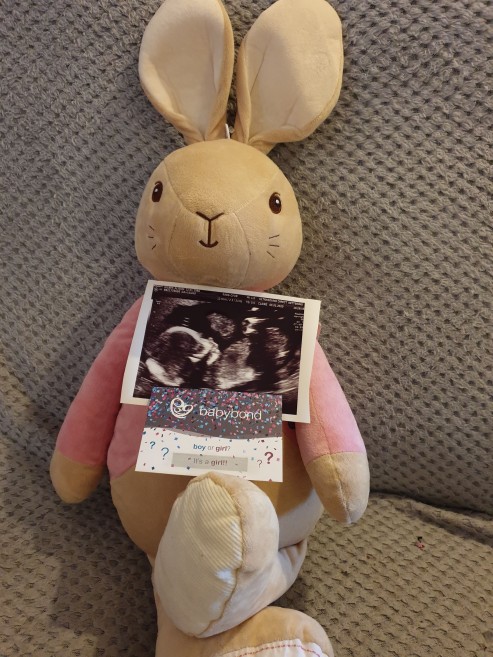 And now I’m 19 weeks 1 day. Next up I have a consultant’s appt this Friday – not entirely sure what for if I’m honest – then a week tomorrow, 27th, is our 20 week scan where I’m hoping everything will be fine and she is still a she!!

One thing I will say, which has been pretty huge, is the anxieties I have felt with this pregnancy. I was convinced something was goong to go wrong the whole way through so far, and although I’m a little more confident now, I still find it hard to believe we will really have our happy ending. Infertility has stolen a lot from me and though I try hard not to let it continue taking from me, it is difficult. I also found out 2 other people I know are expecting around the same time as me, one in C’s family and one at work, and I did feel the same old jealousy and hurt that we can’t do it naturally and they can, which is crazy, I mean I’m pregnant right? Who cares how? I guess old scars run deep. I was also upset that after years of trying, our “thunder was being stolen” by others having babies the same time. It’s been about a month now since we found out about the other 2 and I don’t feel that way at all. Still upset about the natural conception that we can’t do, but being due the same time isn’t bothering me now, it’s nice to have people to talk to at the same sort of stage tbh!!

I guess I’m just surprised that a bfp wasn’t the magiv wand I thought it would be. Don’t get me wrong, I’m thrilled and so happy to be where we are, but the hurt is still there, the feelings of failure etc. Maybe they’ll go eventually, or maybe they’re just part of me now? Only time will tell (and maybe counselling, if I feel like I need it down the line)

Will update after the consultant and scan