I just realised I didn’t update about the house – we had no end of trouble with the application with people not sure what documents we needed etc and then finally….we got told I hadn’t been in my new job long enough. Why they didn’t tell us that right at the very beginning I don’t know! They did offer us a change of lender but it was with extortionate fees so we dropped out. I was a little gutted but I had actually been having reservations anyway so I think maybe it was a blessing in disguise. We are going to put it on hold for the foreseeable now. I don’t actually know what our next plan is really. House? Ivf? House…or…ivf? No clue. But I don’t mind not knowing right now.  It’s so nice to be just living life instead of obsessing. Which isn’t to say I don’t care anymore, because I very much do, but it is a sort of background hum now rather than a banging drum day in and day out! I like it like this much more 🙂

Is 9 weeks old and gorgeous!!! And also extremely furry!!! 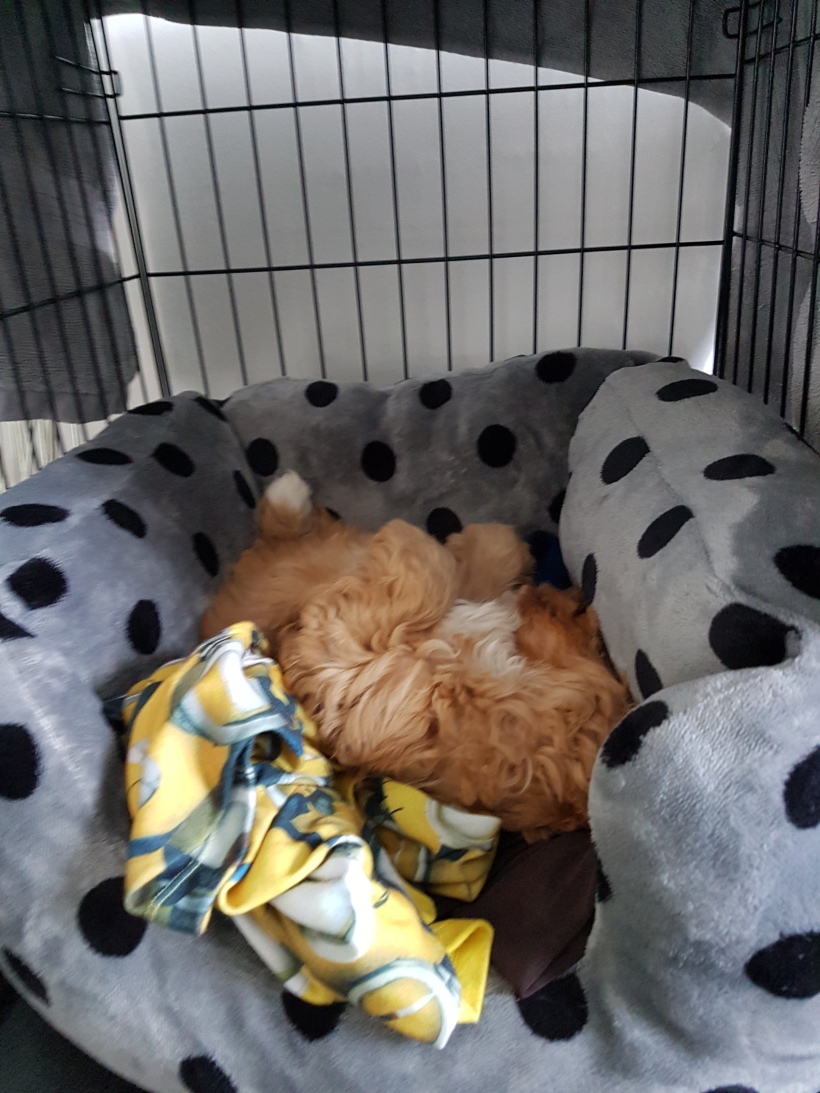 We only picked him up yesterday but already love him so much. H is with her dad this weekend so will be getting a shock when she comes home tomorrow. So nice to have something positive in purchasing lives, the last year just seems to have been one poop hitting the fan after another.

I threw out my pill. 2 whole years. We’re still on a ttc break, but I felt like I should mark the occasion :). Two years ago, C was saying how this time next year we will have a baby. Ha. I actually knew we would struggle. I didn’t think it would be this much of an issue, granted, and definitely expected to have had a baby by now, but I knew we would have problems.  Just a gut feeling I had. It took 9 months to conceive dd too, which I know isn’t really that long but it also wasn’t super fertile fast either. Either way, I kept telling C I thought it would take ages and he kept saying I was being silly. Even my friends said no way, it only took so long cos of the age of H’s dad (we had a pretty big age gap, him being almost 15 yrs older than me). It seems weird now, I feel sad for the hopeful and happy me back then. I feel like there is always a bit of me that will be a little bit sad because we can’t have a baby naturally. I’m sure (really, really hoping!) that actually, that feeling will disappear as we get older, either because we get an ivf miracle or if that doesn’t work, we just accept it. I used to spend ages looking at reviews on pushchairs and cots etc, picking out the best ones and working out how much money we would need to save. Like “if i get pregnant next month, we need to save x amount a month”, and thinking ‘jeez we are gunna need about 2 grand for all the baby gear I want and a nice wedge in the bank to get through mat leave. How are we going to save that up?!’ And now….we need at least 5 grand just to have 1 go at making the actual baby. Ah, the irony! I really do miss that hopeful feeling that in a month or two it’s sure to happen now. I mean we could get incredibly lucky cos it does happen and fingers crossed we are the lucky ones, but statistically speaking it really isn’t a plan to rely on so I don’t feel all that hopeful at all.

Also I just wanted to talk about relationships. Everyone else seems to find it brings them and their partner closer together. Personally, I have found it very tough on our relationship. I have a bit of me that thinks how unfair it all is, why us, why him, why me? Why the two of us together? Part of me, totally wrongly, blames both of us a bit although it is completely beyond our control. Who said emotions were rational though?! And it has been HARD. I feel like we are the only ones who have struggled with this, but wanted to write about that too. I feel like our sex life suffered too, with me, again irrationally, feeling like it was a bit pointless if we weren’t going to have a baby out of it.  That has changed now, but it was definitely something I had to work through.

Anyway. Happy 2 year anniversary to us…it’s been one hell of a ride.